Breaking Up the Boys Club

During a recent MIT Media Lab Q&A session, Blizzard’s Chief Creative Officer, Rob Pardo, made a few comments about social commentary, diversity, and Blizzard’s treatment of women in games, leading to a backlash on social media. Other places have covered his comments and the backlash more extensively than I will here, but for a deeper dive into specifics, check out Blizzlist’s Storify of the goings-on.

Regardless of how one feels about Pardo’s statements, I haven’t seen anyone, including Pardo himself, disagree with this point: Blizzard struggles with the portrayal of women and other minorities in its games. What is unfortunate to me is how the rest of his comments about that point read – that they try, but they’re subject to forces out of their control. Between the hiring pool and the background of their current workforce, all they can do is “actively catch [themselves].” This throwing up of the hands doesn’t cut it. Blizzard is a company who has the project management skills to put out some of the richest gaming experiences ever produced. They are able to meet the organizational demands of hosting a wildly successful convention on a regular basis. If they put their collective minds to it, they have the organizational fortitude to make whatever they feel needs to happen happen. It’s their job – what they do best. The intent of this post is to posit some ideas about what they could do to make it less of a struggle to portray women and minorities appropriately – if they put the effort in.

Two caveats before I get started – First, I’ve never worked at Blizzard. Some of these suggestions may already be underway/in place, and some may be infeasible for reasons I’m unaware of. I hope that doesn’t distract from the primary point: Blizzard could do more. Second, none of these suggestions concern the subject matter itself. For a great article on what Blizzard could do in that vein, read Matthew Rossi’s excellent WoW Insider post on this topic.

Pardo mentions in the Q&A that he just doesn’t see resumes come in from women candidates for their developer openings. I’m certainly in no position to dispute this, but other companies have been in similar situations and made progress on that front.

Take, for example, Etsy – a tech company based around the selling of handmade and vintage items. They faced a similar issue at the start of 2011. Despite having a user base of approximately 80% women, their engineering team was 6% women.  They considered it important to their brand and user experience, but despite emphasizing the need to address it internally, that imbalance didn’t improve – in fact, by the end of that year, it had worsened, with women making up less than 5% of their engineering ranks.

What was the problem? Taking a look at their situation more closely, they determined they were up against a few obstacles. First, senior engineers are rarely looking to change jobs. Second, the senior women engineers in that group were even less likely to switch, particularly to companies who had the imbalance Etsy did. Third, they also found that their hiring process was slanted toward candidates who did well answering quickfire trivia type questions, which had zero bearing on their job qualifications and was more likely to eliminate women from consideration than men.

Their big fix? They funded scholarships to send 20 women to Hacker School, a program designed to make attendees better programmers. By encouraging junior women developers, they were able to hire people with great attitude and aptitude and train them for the skills they needed to be successful at Etsy.

By rolling in smaller fixes to their hiring process and their workplace (more on that in a second), their engineering team is now 18% women. While they can still improve the imbalance, by making the changes they have, they’ve broken the vicious cycle: companies with a better balance are more likely to attract strong women candidates. Seeing this public success, other tech companies – Dropbox, PhotoShelter, GitHub – are now following suit.

Beyond breaking the cycle, there are other steps a company can take to make their company a more attractive workplace. One of the slides from Etsy CTO Kellan Elliott-McCrea’s presentation about their program calls out guidelines they put in place to foster collaboration and learning: 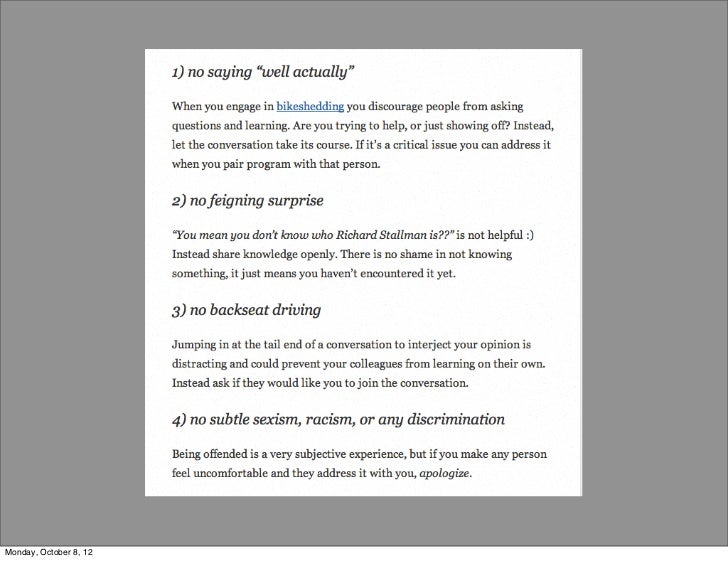 Etsy Guidelines for a Safe Environment

The benefits of establishing similar rules aren’t limited to promoting diversity. Setting those expectations will lead to better and more substantive collaboration; this in turn will make employees more productive and the products they’re creating better.

Other steps Blizzard can take to foster a safe environment, some small-scale, others large:

That last one is likely the most controversial and hardest to put into practice, but it’s also the most important. If you do the hard work of finding and training great women employees, but then the work environment sends them signals they don’t exist or their contributions don’t matter, they will leave.

Also, Blizzard can Google it: there is no shortage of ideas out there on how to make a workplace a more attractive destination for women and minorities.

3. Promote diversity via their development process.

Let’s say it will take a while for the change in hiring practices to lead to a shift in the current imbalance. What can they do now to address their “struggle”? They can make some big gains by making minor adjustments in how they develop software. Currently, most software development shops build to some level of documented requirements. These requirements describe attributes of the software, and are verified later in the process – if a feature doesn’t meet a given requirement, then a bug is filed, and the code is sent back for revisions.  If diversity and appropriate character portrayals are truly important to Blizzard, then those attributes should be put in as requirements and verified.

Note that there is some precedent for this – as evidenced by Pardo’s comments, they “sometimes have to actively catch [themselves] and go, ‘wait, we need to not make our women characters wear armor that look like Xena or Sonja.'” Rather than address issues in a haphazard fashion when something is particularly egregious, Blizzard needs to establish standards and address issues as they would any other software requirement, early and often.

4. Bring non-engineering employees into the process.

Of course, Blizzard will need to understand that these individuals will be trailblazers and have to be empowered. I’d suggest that having someone from upper management who is open-minded and supports the change participating in the reviews would help establish it as important to the company.

5. Solicit feedback from the customer base.

As evidenced by the number of voices clamoring for Blizzard to change, there is no shortage of customers that would be happy to help make Blizzard’s products more inclusive. Blizzard could reach out to these individuals and set up channels  (e.g., a mailing list, forum, or test realm) to get feedback on early development efforts. This allows Blizzard to make positive changes before they become PR problems. Take the case of Ji Firepaw’s dialogue during the Mists of Pandaria beta, for instance.  While this was improved after early feedback, since the beta was so wide open, a common perception was they fixed it because of the outcry, not because they cared. If they’re able to address issues further upstream, they’ll get credit for doing things the right way vs. having to fix things after people have already judged the work.

Blizzard’s history is littered with instances of mishandling inclusiveness and diversity. The fact is that at this point, Blizzard doesn’t have much credibility if any, with the part of their audience which holds these matters dear. So when a high-ranking employee makes public statements, if it’s off point at all, they’re going to get taken to task, because it falls in line with their pattern of past behavior. What they have to do to right the ship isn’t just to care, but to be seen as taking active steps to correct the imbalances they have. If they don’t they will never establish credibility, and their audience is going to continue to self-select.

If Blizzard wants to focus on fun, then by all means, they should do so. But they should focus on fun for all of their core audience, not just the part of that audience that matches their current engineer demographic. And that’s only going to happen if they are seen as a company, from upper management all the way down, that cares about changing their image, and they take active, concrete steps to do so. Anyone who has been to Blizzcon knows that the company is filled with people passionate about their products. I hope they channel that passion and build us a world everyone feels home in.

I'm a rogue who likes to raid, guilded with Apotheosis on Eldre'Thalas. If you think I may have pumpkin headed you, it was actually @kurnmogh.
View all posts by Tikari →

One Response to Breaking Up the Boys Club

This site uses Akismet to reduce spam. Learn how your comment data is processed.